CHAPTER 3: Embark on a new journey with a group of villagers in search of a new part of the island to populate. Vg article on app developers in norwayemv software developer. Developer's Edition CHAPTER 4: The island's chief is worried that life is slowly diminishing on. Virtual Villagers 3 - The Secret City Some tips and hints: - Submitted by: rashminder. Make sure to plant your first seed right away (drop an adult villager - but not a nursing mom - on the seed near the. 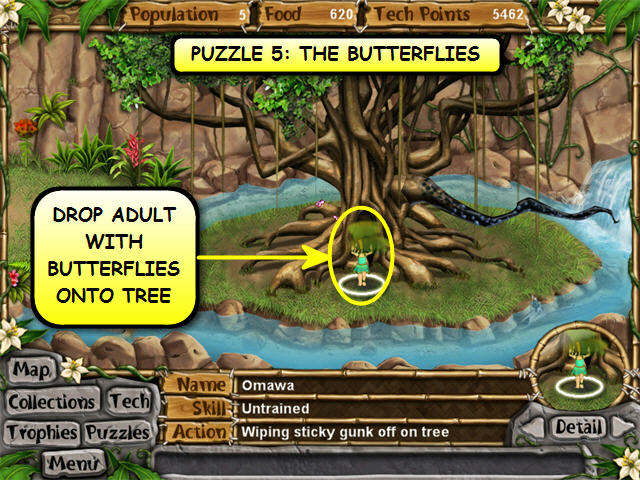 Some tips and hints:
--------------------
* Make sure to plant your first seed right away (drop an adult villager - but
not a nursing mom - on the seed near the lift). That seed may be a mango,
papaya,or banana (random chance).
* The lift is useful for placing an adult and being able find them in the same
place a few seconds later. (i.e. for getting the couples you want for making
babies.) Other places are the waterfalls and bath (when complete.)
The villagers will stay in that location for several seconds before wandering
off to work or play.
* When your adults are collecting objects (keys, firewood, etc.), they may drop
them if interrupted by a celebration or if you click on them. The item will
then'warp' back to where it was found originally.
* The (collectable) tablet pieces will start to appear near the rubble when the
rubble clearing project has gotten started with at least 2%.
The six herbs (your villagers will 'see' these herbs when you fly them over):
-----------------------------------------------------------------------------
* The Cactus is located just above the Science area.
* The Black Orchid is on the edge of the grassy area below the orchard
* The Rose is located on the right edge of the orchard, below the hanging thing
* The Lotus is to the left of the stairs near the bath
* The Tiger Lily is partway up the path to the door (orange flower on right)
* The Berry (Magic) or Pitcher Plant (Nature) is located to the left of the
alchemy lab, where the kids go when nature calls. These plants only appear
when you have purchased Level 2 in your faction.
Puzzle:
-------
-=Puzzle 1=- The First Chief. Drop all your villagers on the robes in the amphi-
theater: any villager except nursing moms can become chief. If you can't find
your chief right away, wait until the moms no longer have babies and drop them
on the robe. (You will need to repeat this process each time the chief dies.)
-=Puzzle 2=- The Bee Hive. First, light the fire (collect wood and dry grass in
the firepit, then light the fire). Then drop an adult villager on the burned
out torches near the hive. He/she will return the torch to the hive and calm
the bees so you can collect honey.
-=Puzzle 3=- The Alchemy Lab. You will need an Adept Scientist (or more than one).
Scattered around the village (random locations) are 2 colored pots (red or
yellow with white stripes), a brown pot, a gray bowl with spoons, and a short
spear (orange-brown handle with gray blade). Drop your scientist(s) on each
item and they will return it to the lab - if they drop the item before reaching
the lab, it will warp back to where you found it originally. Returning all five
items solves the puzzle.
-=Puzzle 4=- The Roster of the Dead. At the far right of the map (use keyboard
shortcut '3' to get there) is a grassy area - at the upper right of this area
is a big leafy bush. Have your villagers remove these leaves, which uncovers
the roster of the dead (they will gain building skill; trained builders can
accomplish this faster).
-=Puzzle 5=- Weather Dancing. You will need Level 2 Leadership, a tribal chief,
and 3 Adept Farmers. First, drop the chief on your lit fire. He/she will begin
weather dancing. Then drop the farmers on the fire, and they will join in. You
will know they are successful when sparkles appear over their heads and under
their feet.
-=Puzzle 6=- The Lift. You will need 3 Adept Builders and Level 2 Restoration.
Once you have purchased the tech, drop your 3 builders on the 'strange machine'
in the orchard. Make sure their action line reads 'repairing the lift'. If you
have done this correctly, the lift will be repaired.
-=Puzzle 7=- The Rubble. You will need Level 2 Restoration. Drop a villager
(preferably a builder) on the pile of rocks at the bottom of the map. He/she
will clear away the rocks, gaining building skill (builders will accomplish
this task faster).
-=Puzzle 8=- The Ancient Bath. You will need to have completed Puzzle 3 and have
a Master Builder. Drop your builder on the 'chalkboard' in the alchemy lab
(he/she will 'see' it if you fly them over the lab) - he/she will create the
the plans for the bath. Drop your builders on the bath to complete the project.
-=Puzzle 9=- The Statue. You will need Level 3 Restoration, Level 3 Leadership, a

tribal chief, a Master Builder, and a completed bath (solved Puzzle 8). Drop the
Master Builder on the chalkboard (which will be blank after the bath is completed),
and he/she will draw up plans for the statue. Drag an adult villager (not a nursing
mom) up the path to the door until he/she 'Sees a good place to anchor the statue'
-- this villager is more likely to be successful if he/she has some building skill.
That villager will then build scaffolding to help anchor the statue. Your chief
must direct work on the statue, so drop him/her on the statue to begin this process
- if the chief stops directing work, then progress will halt until you return the
chief to his/her duties. Once the chief is directing, you can then drop builders
on the statue to help 'pushing the statue'. The villagers must push the statue up
the path towards the door - this will take several hours (you can click on the
statue to bring up a timer in the status bar that will help you determine how long
is left - but this time depends on how many builders you have working on the project
and may increase if builders leave the project). Your builders may occasionally
complain that 'there is no more room to help out' - only a limited number of
builders can work on the statue at any given time.
-=Puzzle 10=- The Orchard. You should plant your first seed as soon as the game
starts: this first seed is located next to the ruined lift: drop one of your adult
villagers on this seed and he/she will plant it. To gather the next two seeds, you
will need to have completed Puzzle 6 (The Lift). As soon as a rain storm starts,
place an adult villager (but not a nursing mom) on the lift (his/her action line
should read 'Standing on the Lift') Leave the villager there until the lift reaches
its highest point, when a seed will fall from the tree above. Drop the villager on
the seed to plant it. You will need to plant a total of 3 seeds (the original plus
two from the lift) to complete the orchard - the puzzle will be completed once all
three trees have become mature (and start producing fruit - it takes about 8 hours
on 'normal' speed for the tree to mature). Additional seeds (beyond the first three)
will not be planted, but will instead be placed in the food bin.
(Note: If you have trouble getting to the lift before it starts to go up, you may
wish to pause the game with the spacebar when you see the rain start before finding
a villager. You will need to unpause the game to see their status line to make sure
they are properly placed.)
-=Puzzle 11=- Banishing the Sharks. You will need to have completed Puzzle 3 and
have at least Level 2 in your chosen faction, Nature or Magic.