A Raisin in the Sun premiered on Broadway on March 11, 1959. To the surprise of many, the play became a huge success, earning four Tony nominations, the New York Critic’s Circle Award for Best play, and running for two years. It was a play for which producers felt there would be no audience and on opening night both Hansberry and producer Phillip Rose felt the play would be a failure as it had received such a cold reaction the night before.

But A Raison in the Sun was a critical and popular success, receiving four Tony nominations, running for almost two years, and being made into a successful film with the entire original cast. It marked the first time a black woman had a drama on the Broadway stage and the first time a black director, Lloyd Richards, work on a Broadway play. Hansberry and Richards were both nominated for Tonys.

A Raisin in the Sun and the Classroom

A Raisin in the Sun, which is commonly read by high school students, offers numerous opportunities for interesting and insightful classroom experiences. Along with a rich script, the 1961 motion picture and the 2008 TV-movie, which stars the cast from the 2004 Broadway revival, are both available for views. Also, there will be another Broadway revival in March 2014 starring Denzel Washington and Diahann Carroll. There’s plenty of opportunity to access this show and utilize actor and director choices and interpretations in discussions. 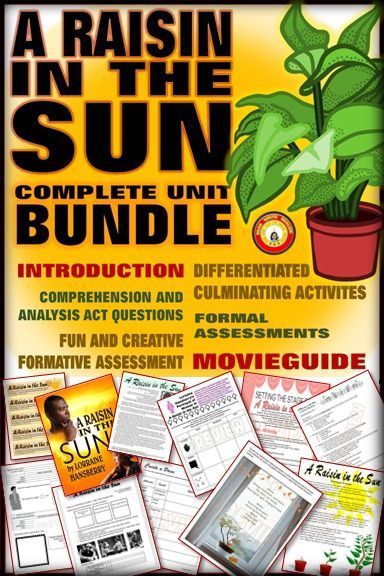 It’s interesting to consider A Raisin in the Sun in connection with history. The play is based on the life of Lorraine Hansberry and their fight to break racially restrictive covenants in the white Chicago neighborhood of Washington Park. Carl Hansberry, the playwright’s father, who was a successful real estate developer, had purchased a property in the racially restricted neighborhood from James Burke. When the Hansberry’s moved in the neighborhood protested vehemently. Carl Hansberry took the issue to court, claiming protection under the Fourteenth Amendment. The case of Hansberry v. Lee. 311 US 32 (1940) was heard by the Supreme Court and the restrictions against blacks were defeated.

Another interesting play to consider in connection with A Raisin in the Sun is Bruce Norris’s Clybourne Park (2011 Pulitzer Prize and 2012 Tony Best Play), which also combines history and fiction, looking at event in a neighborhood based on the one into which the Hansberry family moved. The first act takes place in 1959, focusing on the area before A Raisin in the Sun premiered and the second act takes place fifty years later. Each act takes place in the same house and involves an attempt to sell the property.

A Raisin in the Sun was written during the development of and takes place just before the Civil Rights Movement of the 1960s. The movement changed American forever for blacks and eventually broke down huge racial barriers. It was also a time of extreme violence in America as white supremacists and those fighting for racial equality clashed. Seeing A Raisin in the Sun in relationship to this era is a great way to begin to understand how art reflects social trends, changing beliefs, and developing conflicts within our society.

What Makes a Play Universal?

Although when A Raisin in the Sun premiered it was thought to be a “black play” that really did not pertain to whites. But today we can certainly universal as well as specific racial themes in the play. A Raisin in the Sun is about family and what makes each person in a family part of a unit and at the same time an individual. It’s also about emotions that connect all of us, including those that guide our dreams, cause us to be prejudiced, and make us want to stand up and fight. Hansberry offers us plenty of food for thought.

How Things have Changed?

Raisin In The Sunms. Scrolls Ela Classes For Beginners

Since the 1959 of Lorraine Hansberry’s play A Raisin in the Sun, the American theatre, our laws and government, and the manner in which we socialize, form relationships and work with one another have changed. As an example in 1959, when racial segregation was commonplace and the law in the South and there were major restrictions on the opportunity for blacks to vote, probably no one or close to no one believed the U.S would ever have a black president. Now, we don’t think twice about it. A Raisin in the Sun offers numerous opportunities to see how much a country can change in fifty years. It is well worth classroom investigation.