Penton Farms, Verbena, Alabama. 18,358 likes 4 talking about this 9,952 were here. We are a fourth generation family owned and operated farm. We have 100 acres of fruits and vegetables along with. The Homestead Fall Farm. Open seasonally in the Fall for all your seasonal needs – from pumpkins to decor! In the Fall Homestead Fall Farm hosts a pick-your-own pumpkin patch, wagon rides, putt-putt golf, a corn maze, playground, gift shop, and more – including hosting an Open House four weekends. Polly's Pumpkin Patch opened in 2003 when we decided to carry on the farming tradition and bought the Juckem family farm. The farm has been in the Juckem family since 1889 and vegetables were grown here then also. We feel its very important to offer the freshest produce, harvested daily. The Pumpkin Patch is a great place to pick your own pumpkins! The pumpkin patch is located at the bottom of the Tube Slide. Slide down and walk into the Patch. We also offer a Pumpkin Tram so you can take a ride to the Patch. Big pumpkins, little pumpkins, pumpkins so big they can only be removed with help. Orange, white, blue. Montgomery and southeastern Alabama. Every year we have a pumpkin patch and corn maze! Local Pumpkin Patch Farms - go pick pumpkin's at a local farm in the Chilton County Alabama area. When there’s a crisp snap in the air, nothing beats a day at the local pumpkin patch farm. It’s guaranteed to put a Jack-o.

Penton Farms Pumpkin Patch in Verbena is open for the season.

New for this year are the cow train, pipe swing and goat playground.

She said the cow train was already popular with visitors.

“We added a goat playground for the goats there down at the animal barn,” Penton said. “It has a slide and a big deck that they can play on.”

Each year, Penton researches ideas to add. Usually, she is looking to add free activities, but there is an additional charge of $3 for the cow-themed train, which is pulled by a tractor. While there is not an age restriction on who can ride, there is a weight restriction.

“We try to keep it something new every year,” Penton said.

Ninety schools from as near as Clanton and as far away as Bessemer have booked field trips for this season.

Students learned about goats and chickens at the animal barn.

“I enjoy doing the educational tour, and we can teach them about the farm and what we grow out there,” Penton said. “We actually grow our own pumpkins. They are not just something that we buy and sit put there.”

Student Elana Bishop said her favorite activity at the farm was choosing a pumpkin. She said she was looking for a small orange one.

Student Andee Harrison said she liked going through the corn maze with her group.

“I get to run around like a mindless chicken,” Carroll said.

Student Desion Hudson said he enjoyed playing in the hay.

Student Colt Burnett said he enjoyed seeing the animals, especially the goats. Students enjoyed feeding the goats during their visit to the animal area.

Ricks said it was her first year bringing her students.

“I would recommend it to anybody,” Ricks said.

Parent Megan Burnett said she enjoys coming to the patch with her children on the field trip.

“I think it’s a good thing for our community to have something for the kids,” Burnett said.

She said her son Colt gets really excited for the event.

Admission is $10, which includes a large pumpkin. Those under 2 years old get in free.

Additional pumpkins range from $1 up to 150-pound pumpkins for $20. There are 60 varieties of pumpkins at the farm. Penton said the majority of the varieties are edible.

“White pumpkins are popular,” Penton said. “I think that is what sets us apart from other pumpkin patches is that we have such a variety.”

Those interested in simply buying a pre-picked pumpkin and not doing any of the activities do not have to pay an admission fee.

The pumpkins are planted in July, and the harvest began in September.

By J.R. Tidwell / Editor When Francine Wasden took over as director at the Chilton County Chamber of Commerce, one.. read more

SweetCreek Farm Market opened in late March, but from the look of visitors flowing into the barn-style market, it’s already a Pike Road institution. 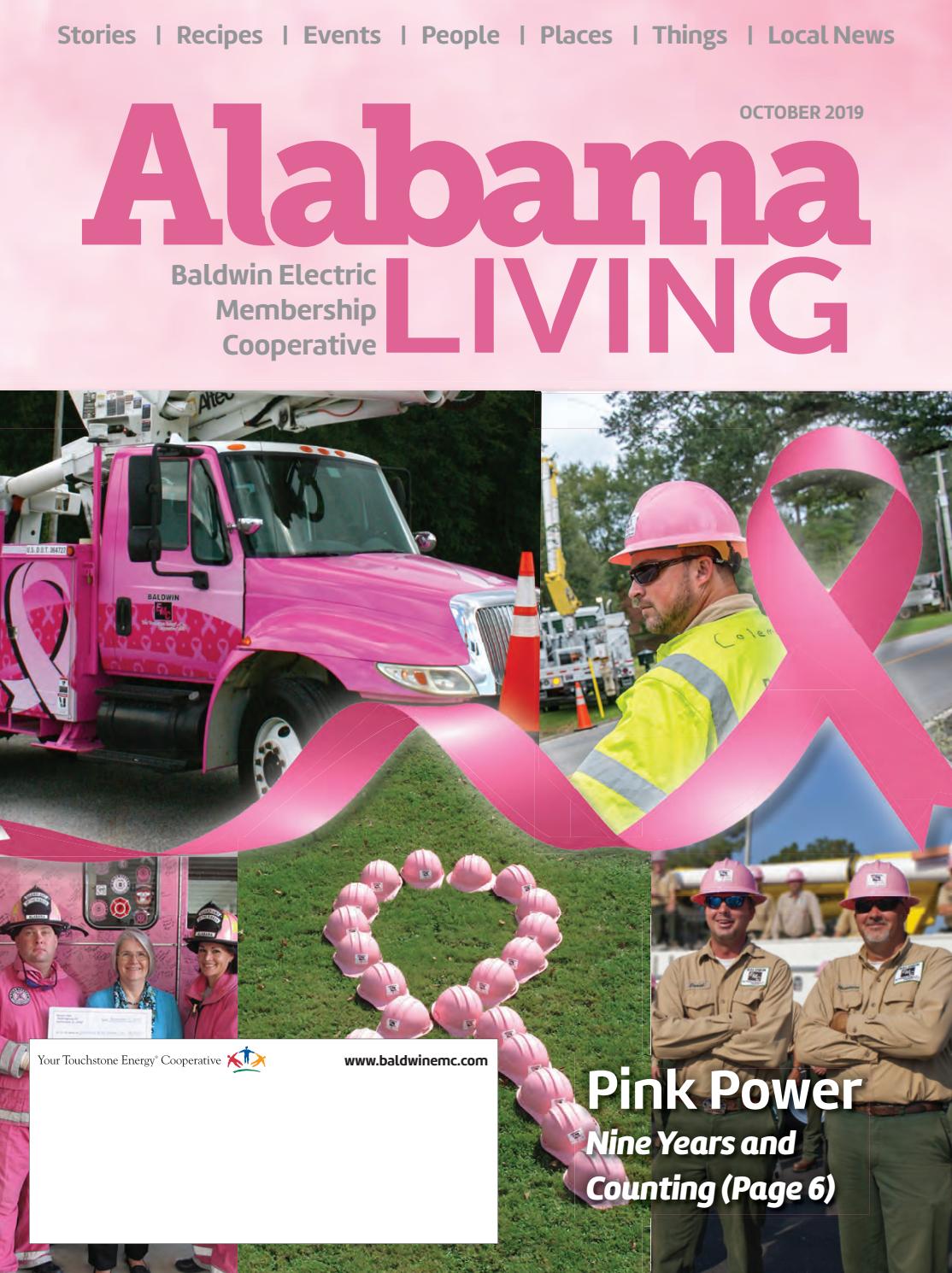 “People have been so supportive,” said Reed Ingram, who owns the fledgling market with his wife, Karen. “It’s our goal to provide them with good food and a good experience.”

In a part of the county lacking fresh produce and restaurants, the Ingrams said they’re more than happy to provide healthy, top-notch, hand-selected produce.

“People today are more concerned about what they eat,” said Reed. “This generation is more health-oriented.”

SweetCreek, named for the Catoma Creek and the market’s fresh-baked sweets, sells produce from across Alabama, running the gamut from well-known goods like Chilton County peaches and Slocomb tomatoes, to lettuce, onions, peas and watermelons.

“We want to help farmers sell what they grow,” said Reed. “It’s important we take care of our farmers, and it’s important to provide consumers with an opportunity to buy local food whenever possible.”

“Everything here except the bananas and oranges is Alabama-grown,” said Reed. And if he could source those from the Heart of Dixie, he would.

For the Ingrams, educating consumers about where, how and when their food is grown is key.

“Some people think all foods are available all year long,” said Karen, who regularly chats with customers about locally-sourced, seasonal fruits and vegetables.

SweetCreek was Reed’s dream for two years before Karen hopped on board. Two years ago, concrete plans were made, and today, the 39-employee market is rocking.

“You can either ride the wave or fight it,” Karen said with a laugh. “I loved it once I decided it was a done deal.”

“We hand-make everything we sell in the cafe,” said Reed. “And we try to take it to another level.”

And then there’s the menu superstar – house-smoked pulled pork on a potato bun with Wickles pickles and jalapeño slaw.

SweetCreek smokes about 2,000 pounds of meat a week for sandwiches and individual Boston butt sales, a number Reed expects will increase during football season.

The Ingrams regularly spend 14 hours a day at SweetCreek, arriving with the kitchen staff at 5 a.m. to bake, cook and prepare for the day. They are there throughout the day for market hours, which are 9 a.m. to 7 p.m. everyday but Sunday, when the market closes at 6 p.m.

But SweetCreek isn’t the only thing keeping the couple busy. Reed serves Alabama’s 75th District in the House of Representatives, and the family owns Reed Ingram Motors in Montgomery, operated by their son, Garrett. Their other son, Chase, works for Merck Pharmaceuticals.

Reed has raised beef cattle all his life, enhancing his role on the House Agriculture and Forestry Committee.

“With this market, plus my experience in the cattle business, serving on the ag committee is a good fit,” said Reed. “It goes hand-in-glove.”

In the few months SweetCreek has been open, visitors have stopped by from across the U.S. on their way south – and even a couple snowbirds headed back to Canada.

“I’ve met people from all but about seven states,” Reed said.

Hattie Smith grew up in Selma, but moved to Oregon 20 years ago. While visiting family in Montgomery, Smith decided to take a trip down memory lane at SweetCreek.

“We came here to get a watermelon because my daddy used to grow them,” said Smith, who frequents farmers markets in Oregon.

Vestavia Hills couple Joe and Teresa Granger watched SweetCreek’s construction unfold while routinely traveling to Hartford, and when the market opened for business, they had to give it a go.

“We’re south Alabama born and bred, so we love fresh vegetables,” said Teresa. “This is the kind of food we grew up on.”

Although the Ingrams don’t currently grow any produce they sell, they’re planting a pumpkin patch this fall and have plans for vegetable gardens next year.

“Our brains are clicking on the next thing we want to do,” said Karen. “I don’t see an end in sight.”